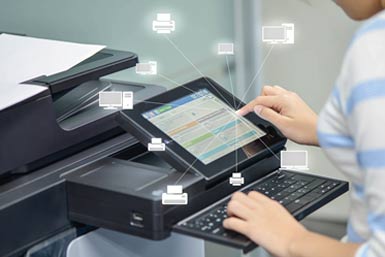 Printers have been a mainstay in offices and homes for the past 30 years, ever since Xerox invented the first LaserJet printer in 1977. And like other popular technologies, printer technology is evolving to become more efficient, more compact, and more secure.

According to Troy Browne, marketing manager for HP’s LaserJet business, HP has introduced an entirely new cartridge that can print 58% more color pages and 28% more black-and-whites. This cartridge requires less heat to melt the particles in the cartridge, which means less energy used and more prints per cartridge. But the internal printer technology isn’t the only thing that’s changing. The size of the printer has continued to decrease as well. The three latest additions to the HP LaserJet family are 40% smaller than previous models and use 53% less energy! In short, these printers are more efficient and more compact, saving businesses space, time and money.

But despite these alterations in overall printer design, security is where printer technology is making the most impressive developments. The latest printers from HP can identify which user is printing any given document, and whether or not that user is authorized to print that document. The latest printers can also store print jobs in the cloud until the user manually verifies that they are at the printer, ready to receive the printed document. Both of these solutions increase document security, by keeping the wrong people from accessing printed versions of confidential documents. Plus you save money and resources, as an added bonus! (Say goodbye to the days of long-forgotten print jobs still sitting in the printer tray.)
Though some people may have expected flying cars and self lacing shoes 30 years after the first LaserJet was introduced, those two technologies are not quite here. But printer technology is moving along like every other office technology: more efficient, more compact, more secure.